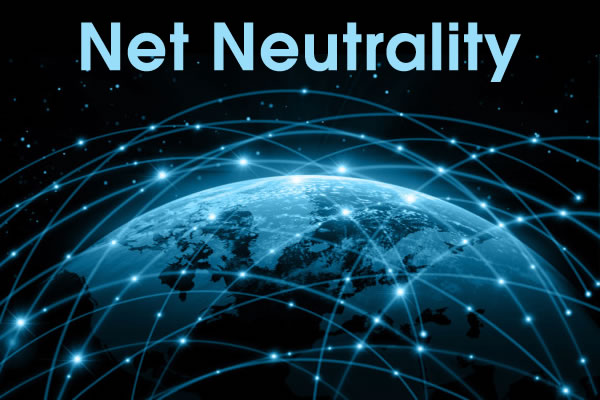 “Net neutrality” –the phrase was first coined by Columbia Law School professor Tim Wu, and is used to signify the concept thatthe Internet is merely a carrier of online content which does not distinguish one web site from another. In other words, it is the principle that all traffic on the Internet must be treated equally by Internet service providers. Those advocating Net neutrality believe all bits of data are equal, and, therefore, should not be discriminated on the basis of content, site or user.

Bharti Airtel, towards the end of 2014, decided to charge subscribers extra for use of apps such as Skype and Viber
•These apps compete with the voice and messaging services of telecom providers, and are cheaper
•There was an uproar, after which Airtel stayed its decision, saying it would wait for regulator Telecom Regulatory Authority of India’s (TRAI) Consultation Paper on Regulatory Framework for Over-the-top (OTT) services.
Facebook brought to India internet.org, a pre-selected bouquet of Web sites offered free to subscribers of Reliance Communications.The buzz became louder after TRAI put out a 118-page consultation paper asking the public for its opinion on 20 questions, most of them about how the Internet can be regulated.
•Over 4.2 lakh mails were sent in support of net neutrality
•Political parties, political leaders celebrities joined the bandwagon
In the meanwhile, Airtel (April 2015) launched Airtel Zero, which is a free offering of a slew of apps that sign up with the telecom provider. Subsequently, Flipkart pulled out of the platform after initially agreeing to be on it, saying it was committed to Net neutrality.

Benefits of Net Neutrality -Who? & Why?

The benefits of Net Neutrality extend to literally every internet user. Start-ups especially benefit from this.
•The Internet has reduced transaction costs and levelled the playing field
•A start-up can come up with an app today, and can immediately attract a global audience
The likes of Google and Facebook could have writhed to grow if the Internet had not been open.

The telecom companies complain that voice-calling and messaging apps are cannibalizing their business. Hence, these companies do not like the way the apps are riding on their networks for free.

Europe is trying to correct a 2013 proposal for Net neutrality, in which privileged access was allowed to ‘specialized services’. This was vague and threatened Net neutrality.
Chile, in 2014, banned zero-rated schemes, those where access to social media is given free to telecom subscribers.


The Verdict -TRAI rules in favour of Net neutrality

On February 2016, TRAI barred telecom service providers from charging differential rates for data services, effectively prohibiting Facebook’s Free Basics and Airtel Zero platform by Airtel. According to TRAI, tariff for data services could not vary on the basis of the website/application/ platform/ or type of content being accessed. For example, a consumer cannot be charged differently based on whether she was browsing social media site X or Y, or on whether was watching streaming videos or shopping on the Internet.
TRAI’s explicit declaration on Net Neutrality -
•No service provider can offer or charge discriminatory tariffs for data services on the basis of content.
•No service provider shall enter into any arrangement, agreement or contract, by whatever name called, with any person, natural or legal, that the effect of discriminatory tariffs for data services being offered or charged by the service provider for the purpose of evading the prohibition in this regulation.
•Reduced tariff for accessing or providing emergency services, or at times of public emergency has been permitted.
•Financial disincentives for contravention of the regulation have also been specified.
•TRAI may review these regulations after a period of two years.
A fine of Rs. 50,000 would be levied per day, subject to a maximum of Rs. 50 lakh, for any violation of these regulations by the service providers, according to TRAI. An exemption, however, has been made for offering emergency services. The move was well accepted and cheered by industry bodies such as Nasscom and IAMAI leaving the telecom operators relatively disappointed.
Industry views / comments –
•Rajan Mathews, Director-General of operators’ body COAI, told The Hindu: “We are very disappointed with the ruling. Differential pricing is an effective marketing tool and would have helped in bringing online the next one billion people. We areconfused as the decision comes at a time when the government is pushing adoption of Internet.”
•Amresh Nandan, Research Director, Gartner, said while operators might not be happy with this notification, they still have the ability and freedom to create different kind of Internet access packages as long as content was not a parameter to provide or bar access to anyone.
As per the regulations, existing plans which are in contravention of the rules can continue for six months, post which they willneed to be stopped. The latest regulation is said to have set the tone for regulators across the globe, especially those of countries that have socio-economic features like India’s.